Oil painting on canvas by the acclaimed Mexican artist Amador Lugo. The subject is a still life with flowers. 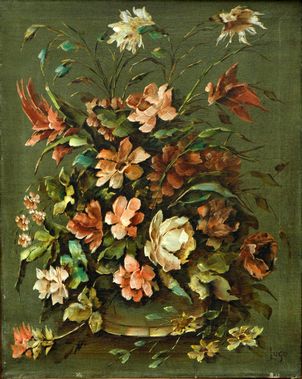 Amador Lugo Guadarrama was born on April 12, 1921 in Santa Rosa, Guerrero. He was in pupil of Tamiji Kitagawa (1894-1990), who was then the director of the Escuela de Pintura al Aire Libre de Taxco, Guerrero. Although in 1933 the School was still free, they underwent radical reforms in their teaching. To further his studies, Lugo moved to Mexico City in 1942 joined the engraving workshop of the Escuela de Libros de Arte directed by Francisco Díaz de León, and also studied metal engraving with Carlos Alvarado Lang. Later he enrolled in the Escuela Normal Superior and studied plastic arts, becoming one of the few young painters to progress from the Escuela de Pintura al Aire Libre to professional training.

He was one of the founding members of the Sociedad Mexicana de Grabadores (1947), Sociedad para el Impulso de las Artes Plásticas (1948) and the Salón de la Plástica Mexicana (1949). He was also a member of the board of the latter on three occasions. Lugo's work was included in more than 350 exhibitions worldwide. This great painter who was also a poet and writer died on June 26, 2002.