Original collage by Mexican master from Oaxaca Rodolfo Morales. Signed on the bottom right corner and set on it's original handcrafted mirror frame with an "Hecho en Mexico Sanchez" stamp on the back. The frame has one cracked piece on the right side. Provenance from the Galeria Estela Shapiro in Mexico City with the inventory number ROM-559 and Arte Actual Mexicano with the stock number 073. 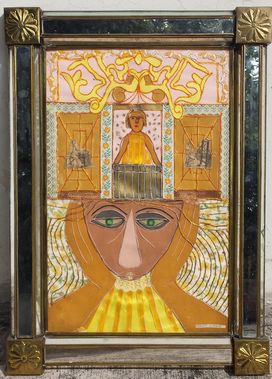 Born in Ocotlan, Oaxaca Mexico. His mother was a school teacher and his father a carpenter. From a young age he would make crafts and later on he used his skills to make beautiful collages for which he was first noticed by friends and art critics. In 1949 he moved to Mexico City to study at the San Carlos Academy of Art.
His first exhibition came late in his life when he was 50 years old. It was held at El Circulo gallery in 1976 by the patronage of Rufino and Olga Tamayo, and with their help he quickly gained great notoriety. The sculptor Geles Cabrera also contributed to his success by promoting his work along with the Estela Schapiro gallery. His work is an icon of Mexican art, and more specifically of art from Oaxaca. It ranks along with works from other great artists from this region such as Rufino Tamayo and Francisco Toledo. He lived in Ocotlan until his death in 2001.