Large format abstract painting made with mixtures of pigments and sands on canvas to achieve great texture by listed artist Jaime Flores. The work is signed and dated 1978 on the lower right. 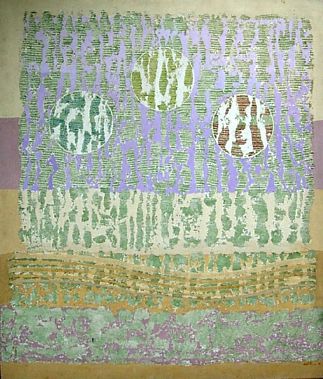 Born in Monterrey, N.L., Mexico, he was granted a scholarship to study at the Escuela Nacional de Artes Plasticas in Mexico City and went on to study further at the University of Texas at Austin. He was awarded the Premio de las Artes by the Universidad Autonoma de Nuevo Leon in 1997. His work has been exhibited throughout Mexico and the US, and has been described as a mystical abstraction of reality.