19th Century oil painting on copper from the workshop of Eduardo Zamacois y Zabala titled "Return to the Monastery". Another version of this painting is housed in the Carmen Thyssen collection in Malaga, Spain. Provenance Subastas Alcala, Madrid.

"A monk is struggling with a donkey at the door of a monastery, and his brethren are laughing at him. You laugh with them. You can't avoid it. In the dispute between the monk and the donkey the provisions have fallen to the ground. Here another profitable lesson is given. While overburdened with cares men seek an asylum in a monastery; but the donkey won't go in. In the picture the donkey has a very funny head. It is a head of exquisite finish. Many a man would like to have such a head. The monk pulls the bridle with all his strength, while his comrades are laughingly trying to unload the patient animal. Everyone who sees the picture instinctively asks whether the monk is not a greater ass than the donkey. It is pleasantly painted and charmingly colored. It is an innocent but powerful satire. Even monks laugh when they see it. They all know a brother who resembles the brother with the donkey".
- From "ONE OF THE GREATEST MODERN PAINTERS" José Martí (The Sun, XLIX, 60 [NY, October 30, 1881], p. 3, col. 1-3.) 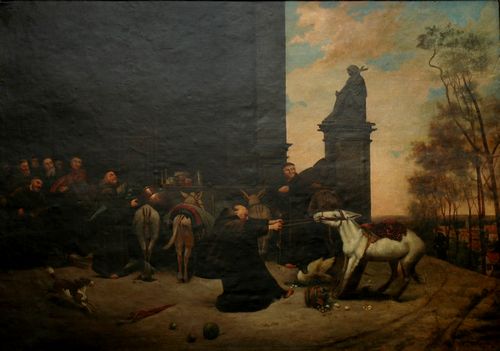 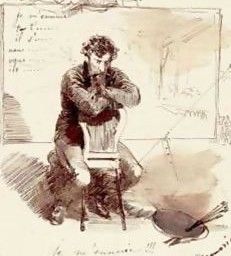 Born in Bilbao, Spain. Zamacois studied in Madrid at the Real Academia de Bellas Artes de San Fernando in 1859. A year later he would study in Paris with Jean-Louis-Ernest Meissonier. Eduardo Zamacois y Zabala would die at the young age of 29 in Madrid.