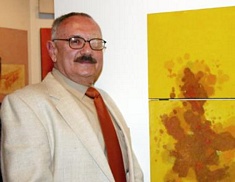 Born in Nadadores, Coahuila in 1938. Sergio Chapoy is a distinguished painter, master of several styles such as realism, surrealism and abstract. He first studied art in Torreon, where his family settled when he was young. His talent quickly earned him a scholarship by the Instituto Nacional de Bellas Artes of Mexico. His work has been exhibited throughout Mexico and abroad since 1972 along side of many important Latin American artists like Jose Luis Cuevas, Leonora Carrington, Francisco Toledo, Vlady, Carlos Merida, Rufino Tamayo and Pedro Friedeberg, among others.