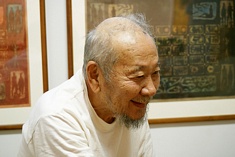 Satoru Abe was born in Honolulu, Hawaii in 1926. After a summer in the California School of Fine Arts he decided to study art and in 1948, moved to New York City to attend the Art Students League. After returning to Hawaii in 1950 with his wife, Ruth, and daughter Gail, Abe met pioneering local artist Isami Doi, who would become a close friend and mentor, and began a series of copper work experiments with fellow artist Bumpei Akaji. His notoriety came when in 1956, he found a home for his bronze and copper creations at the Sculpture Center in New York. In 1963, Satoru Abe received the John Simon Guggenheim fellowship. He is part of the Metcalf Chateau, a group of Asian American artists with ties to Honolulu. Satoru Abe is also highly praised for his great monumental works which can be seen scattered around the islands of Hawaii.

Do you have a work by Satoru Abe that you wish to sell. Please fill out the form here