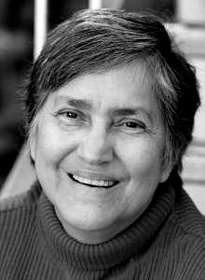 Born in Monterrey NL, Mexico. She started her artistic education at the Taller de Artes Plasticas at the Universidad de Nuevo Leon in 1958. In 1961 she was awarded a scholarship to attend the Academia de San Carlos in Mexico City where she finishes a Masters degree in 1967. During her time in San Carlos she started exhibiting her work in Mexico, South America and the United States. In 1965 she worked with Juan O'Gorman painting a large mural in Santiago de Chile. After her time in San Carlos she moved back to Monterrey where she starts as a professor of print and painting at the Taller de Artes Plasticas. Her work is heavily influenced by northeastern landcapes, especially from the state of Nuevo Leon.

Do you have a work by Saskia Juarez that you wish to sell. Please fill out the form here