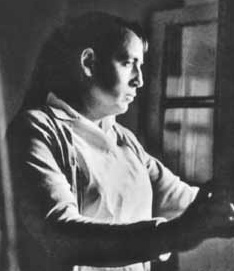 Born on February 3, 1928 in Piedras Negras, Coahuila. She studied at the San Carlos Academy between 1950 and 1954. She made a mural at the Belisario Dominguez school in 1954, same year that she was admitted into the Taller de Grafica Popular. In 1957 she studied at the Esmeralda School of Painting and Sculpture and worked for the Salon de Grabado de Bellas Artes. In 1961 she made a trip to the USSP invited by the Asociacion de Artistas Plasticos. In 1967 she left the TGP. Her greatest influences were Pablo O'Higgins, Leopoldo Mendez and her own passion for social justice and Mexican History. She currently lives in Mexico City. Her work is part of many museum and important private collections in the world. One of her most highly regarded works is "Zapata" which can be seen at the Mario Koogler McNay Museum in San Antonio TX.

Do you have a work by Sarah Jimenez Vernis that you wish to sell. Please fill out the form here