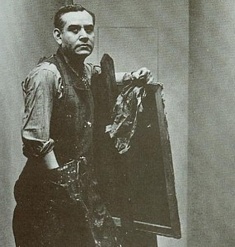 Born in Oaxaca of Zapotec parents, Tamayo moved to Mexico City and lived with his aunt while he helped her working in her fruit market. In 1916 he attended business school and took drawing lessons after hours. He was admitted into the Academia San Carlos in 1917 but later left it to pursue his own unique style. It was working at the Department of Ethnographic Drawings of the Museo Nacional de Antropologia e Historia in 1921 that he became familiarized with Pre Columbian art. He gained notoriety quickly and his work was exhibited in Mexico and New York. His main themes were the cosmos, human and animal figures. In 1948, the Palacio de Bellas Artes held a large retrospective show of his work. It was then that his paintings became widely known in South America, Europe and the US. He was the recipient of numerous awards and his oeuvre is part of prestigious collections around the world.