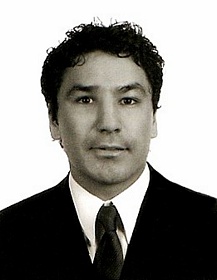 Born on December 15, 1983 in Monterrey, NL, Mexico. This young artist studied Visual Arts at the Universidad Autonoma de Nuevo Leon. After obtaining his degree he went on to work as an apprentice to scupltor Guillermo Salazar Gonzalez in Durango. He has also been a professor of sculpture at his alma matter.


He held his first exhibition in 2001 at Arte A.C. in Monterrey. Since then, he has had numerous solo and collective shows in Durango, Monterrey, and Ciudad Juarez. He masters the techniques of painting, sculpture, printmaking, photography, drawing and stained glass.

Do you have a work by Ricardo Benavides Escorcia that you wish to sell. Please fill out the form here