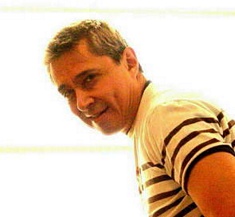 Born in Monterrey, Mexico. He majored in architecture from the Universidad Nacional Autonoma de Mexico (UNAM). In 1975 he gave up architecture to dedicate himself full time to art. In 1978 he moved to Paris, where he starts working on copper prints at the workshop of Lacourière-Frélaut. In 1984 he joined the lithographic workshop of Andrew Vlady in Mexico City. In 1997 he moved to Puebla to work with the Uriarte shop developing a characteristic style in Talavera ceramics. A year later he received a scholarship to live and work in Berlin by the Starke Cultural Foundation. After finishing his duties in Germany he moved to Montreal in 1999. Throughout his career he has held numerous exhibitions in Mexico, Germany, France, Spain Cuba, some Asian countries and the US. One of his most recognized works is the triptych Cielo which was purchased for the Montreal Fine Arts Museum. Another one of his famous creations has been Terra Nostra which adorns the label of the Domaine de Viaud, Lalande-De-Pomerol, 2002 special reserve wine.

Do you have a work by Remigio Valdes de Hoyos that you wish to sell. Please fill out the form here