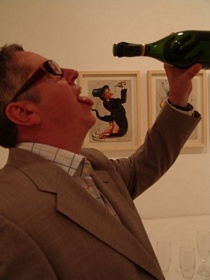 Born in Brownsville, TX, Smith was raised in Mexico City. He is a self-taught arstist who began exhibiting his work since 1978. In 1985 he moved to New York City and today he shares his time between his studios in New York and Cuernavaca. He has exhibited widely in America and Europe and his work is part of collections such as the Broad Art Foundation (Santa Monica, CA), Southampton City Art Gallery, (Southampton, England) and the Museo Extremeño e Iberoamericano de Arte Contemporáneo (Badajoz, Spain).

Do you have a work by Ray Smith that you wish to sell. Please fill out the form here