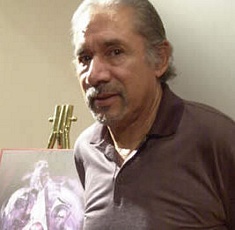 Born in Zacatecas, he moved to Mexico City with his sister and her husband in 1951. Once there he started studying architecture at the UNAM. Just one year later he was awarded the first prize in the Concurso de Artes Plasticas by the Instituto Nacional de la Juventud Mexicana. Part of his prize was a scholarship to one of the finest art academies of Mexico, the Escuela de Pintura y Escultura la Esmeralda. He studied with legendary artists such as Carlos Orozco Romero and befriended other personalities like Francisco Corzas.

In 1954, with Carlos Merida's help, he met Ines Amor, owner of the Galeria de Arte Mexicano, who offered him a solo show in 1956. Since then his art became extremely well known spawning praise and disgust by critics and collectors alike. He had numerous notable exhibits like the ones at the Salón de la Plástica Mexicana, in 1958, and the one at the Palacio de Bellas Artes in 1959. He went on perfecting his style with works as "Rata en el Basurero" and even had a brief incursion into abstract painting with works like his mural at the INAH Library. In 1959 he meets Ruth Rivera, daughter of Diego Rivera, whom he married in 1960.


He traveled to Europe for the first time in 1961. In Spain he was deeply impressed by the work of Francisco Goya. His influence was felt when he was awarded the Cordoba prize at the VII Sao Paolo Biennale. Since then he has held numerous exhibitions in Mexico and abroad. Also a collector at heart, Rafael went on to put together an impressive collection of more than five thousand Mexican masks which he donated to the museum that bears his name in Zacatecas in 1990.