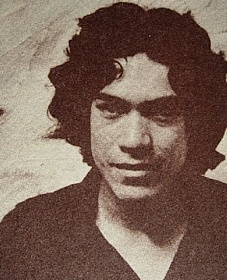 Calzada was born June 23, 1951 in Mexico City, where he studied at the prestigious Academia de San Carlos. In 1968 his work is included in his first collective exhibition organized by Movimiento Editores de Mexico. He does other collectives before 1972 when his first solo-show is held in the gallery of the Academia de San Carlos. He finished his formal training in 1973 and since then has been a part of multiple collective and individual exhibitions in many important cities like: Monterrey, Morelia, Guadalajara, Acapulco, Mérida, Cancun, Guanajuato, Saltillo, and Veracruz in Mexico as well as San Antonio, Washington, New Orleans and New York in the US. His first recognition came to him when in 1972 he received the Estampa First Prize by the Academia de San Carlos. He was also awarded a recognition by the Sembradores de Monterrey in 1980 and named Honorary Citizen of New Orleans and given the keys to the City from the Mayor in 1989. His work is part of private collections in México, France, Brazil, Canada, Ecuador, Costa Rica, Puerto Rico and the US and also many institutions like the Museo de Arte Contemporaneo and Pinacoteca in Monterrey, Academia de San Carlos in Mexico City, the Mexican Embassy in Brazil, and several industrial corporations in Mexico.

Do you have a work by Rafael Calzada that you wish to sell. Please fill out the form here