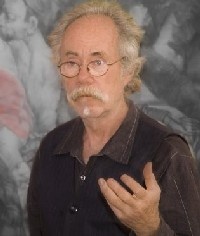 Born on March 14, 1939 in New York City. Peter Leventhal studied at Columbia University and later at the Academie de la Grande Chaumiere in Paris. He lived in many cities around the world, the last being San Miguel de Allende where he had a studio inside the Fabrica La Aurora art center. Despite battling Parkinsons disease, his artistic career has been recognized with several awards such as the Elizabeth Foundation for the Arts Grant in 1997. His work has been exhibited numerous times in New York, Florida, Puebla, San Miguel de Allende and Monterrey, Mexico. This great master of drawing and painting died the last days of May 2019 in San Miguel de Allende.

Do you have a work by Peter Leventhal that you wish to sell. Please fill out the form here