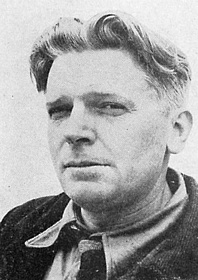 This brilliant artist was born on March 1, 1904 in Salt Lake City. He started painting in 1915 and in 1924 he moved to Mexico City to work with Diego Rivera in the Muralist Movement. He collaborated with Frances Toor and Jean Charlot on the monograph on Jose Guadalupe Posada, published in Mexico by 'Mexican Folkways'. In 1933 he became founding member of L.E.A.R. (League of Revolutionary Writers and Artists) and in 1937 painted collective murals in Talleres Graficos de la Nacion in Mexico City with Leopoldo Méndez, Alfredo Zalce and F. Gamboa. He got his first award from Bellas Artes in 1958 and in 1970 he was awarded the Elias Sourasky Honor for his life-long commitment to art in Mexico.
In 1976 there was an exhibition of his work at the Museo Diego Rivera titled "Cincuenta Años de Labor Artistica". He died on July 16, 1983 and was buried in Rayones, Nuevo Leon. He is remembered as an artist who fought for the rights of the less fortunate and working classes first through Murals with Diego Rivera and then through print and painting.