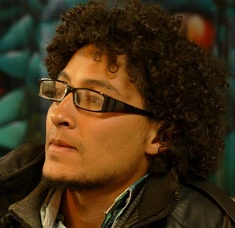 Born on April 13,1988 in Ciudad Obregon, Sonora, Mexico. Nacho lives in Morelia where from an early age his passion for painting and drawing led him to join the street artists or graffiti movement. His themes are strongly rooted in pre-hispanic heritage where we can recognize a strong pride for his cultures and traditions. His first solo exhibition was held at the Universidad de San Nicolas de Hidalgo in Michoacan in 2012 and regardless of his young age he has already exhibited in various places in Morelia and Mexico City. Of course as a street artist his major works can be seen in his murals that are scattered throughout Mexico in places such as Queretaro, Mexico City, Puebla, Obregon, Guadalajara, Playa del Carmen and Cancun.