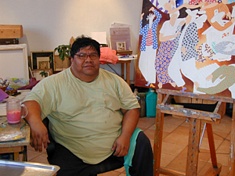 Leovigildo Martínez Torres was born on May 14, 1959 in the city of Oaxaca de Juarez, Oaxaca. He started his art training at the Centro de Educacion Artistica de Oaxaca in 1977 while at the same time doing several workshops at the Taller de Artes Plasticas Rufino Tamayo. His work has been exhibited numerous times in Mexico and the US since 1981. His first solo show was in 1982 at the Casa de la Cultura en Tuxtepec, Oaxaca, and he has also done solo exhibitions in Santa Fe, NM; Los Angeles, CA; Tokyo, Japan and other important cities around the globe. Leovigildo Martinez has several works housed in the permanent collections of important institutions such as the Museum of Latin American Art in Long Beach. CA; the Mexican Fine Art Center in Chicago, IL and the Museo de Arte Moderno in Punta del Este, Uruguay.

Do you have a work by Leovigildo Martinez that you wish to sell. Please fill out the form here