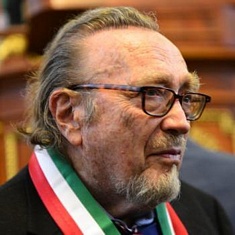 Leonardo Nierman was born in Mexico city in 1932. In 1953 he studies the psychology of color and forms of static objects in motion. It was then that he started his quest to relate abstract art with the cosmic phenomenon. He often said that music was "the greatest gift that humanity had received" and in his paintings there are often allusions to instruments and music related themes. But it is not only the figures, but his use of color and movement that give his art a musical aspect, as if one was listening to a symphony by Bach or Beethoven.
He has worked with oils, tapestries, stained glass, prints and metal sculpture. His work is part of important collections such as: The National Gallery in Sydney Australia, Phoenix Art Museum, Santa Barbara CA Art Museum, Yeshiva University and Jewish Museum in New York, UNAM and Museo de Arte Moderno in Mexico City, the Concert Hall in Stockholm and the Summer Festival Concert Hall in Salzburg, Austria.
Some of his most noted exhibitions are: Paris Biennale, MOMA, France, 1961; Marlborough-Gerson Gal., NYC, 1964; Pittsburgh Int., Carnegie Inst., PA, 1964 & 1967; El Paso (TX) Mus. Art, 1964 & 1971; Mus. Arte Mod., 1972; Wally F. Findlay Gals., NYC, 1970s. Awards: first prize, Art Inst. Mexico, 1964; Palm D'Or Beaux Arts, Monaco, 1969; gold medal, Tomasso Campanella Found., Italy, 1972.
He is also a member of the Royal Soc. Arts, London; Int. Biog. Assn.; Int. Arts Guild, Monte Carlo; Salon Plastica Mex.