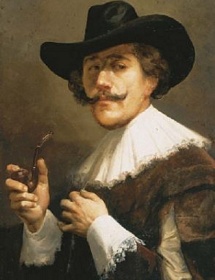 Born in Mexico City, Leandro Izaguirre was a Mexican painter, illustrator and teacher. He entered the Academia de San Carlos in Mexico City in 1884. After studying with Santiago Rebull and José Salomé Pina, he soon devoted himself to painting historical subjects favored by liberal critics in an attempt to create a Mexican school of painting. His most important painting is one for which he was awarded a medal when it was exhibited in Philadelphia in 1893: the Torture of Cuauhtémoc (1892; Mexico City, Museum at the Palacio de Bellas Artes). He was a professor at the Academia, had work commissioned in Europe (1904-6) and worked as an illustrator for the magazine Mundo ilustrado. He was teacher and mentor of such greats as Saturnino Herrán, Leopoldo Mendez, Roberto Montenegro, Alfredo Zalce and Jose Clemente Orozco.

Do you have a work by Leandro Izaguirre that you wish to sell. Please fill out the form here