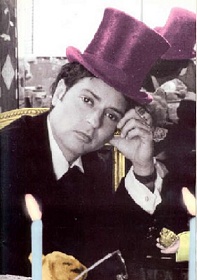 Julio Galan Romo was born in Muzquiz, Coahuila, and grew up in Monterrey, attending private schools. He began to paint while studying architecture at the University of Monterrey and received encouragement from the Monterrey art dealer Guillermo Sepúlveda. He had his first exhibition at Mr. Sepúlveda’s gallery in 1980. A precocious talent with a prickly, flamboyant personality, Mr. Galán began showing in Monterrey at age 20. In the late 1980’s and 90’s, he was Mexico’s best-known young artist. Julio was in effect a second generation Neo-Expressionist. He came to New York in 1984, in the heyday of this polymorphous painting style, whose freewheeling strategies of collage, fragmentation, cultural borrowing and dreamlike suspension were formulated by David Salle, Julian Schnabel and Francesco Clemente, who were influenced by Sigmar Polke. Galan, already strongly influenced by the self-scrutiny of Frida Kahlo, filtered Neo-Expressionism’s lessons through a personality and cultural heritage as polymorphous as the style.
Throughout an astoundingly varied, often uneven range of images, he laced references to his childhood and his sexual identity with allusions to Catholicism, the Mexican Baroque, pre-Columbian cultures, retablos and folk art. The result was a kind of postmodern Symbolism: overripe, often perverse, yet mesmerizing. Julio Galán’s works often had the heat of colorful circus murals that had been defaced by a very sophisticated vandal. Their torturous dreamlike settings tended to be haunted by a handsome young man or boy-child who strongly resembled the artist. He underscored this preoccupation by frequently having himself photographed in different roles, for example as Jesus wearing the crown of thorns, or as sensitive bohemians, Mexican Indians and women in black gowns or veils. Although he never exhibited these self-portraits as his art, they were invariably used in his exhibition catalogs to inflammatory effect: it was like Salvador Dalí channeling Cindy Sherman. In 1985, the young painter made his gallery debut at the Art Mart Gallery in the East Village and began to exhibit widely in Europe. In New York, he also exhibited at Anina Nosei, Ramis Barquet and Robert Miller, where he had his last solo show in 2001; he was included in the 1995 Whitney Biennial. A survey of his work was organized by the Museum of Contemporary Art in Monterrey in 1994. His work has been exhibited individually in Mexico, Argentina, USA, Holland, Spain, Italy, England and France. He was the recipient of numerous awards, from fine art institutions like the Arvil Gallery in Mexico City, Vitro Art Center in Monterrey, Mexico, Salon de la Plastica of the Palacio de Bellas Artes in Mexico City, and the Concurso Nacional de Artes Plasticas in Aguascalientes. Julio Galan died on August 4th 2006 after suffering a brain hemorrhage in Zacatecas, where he spent the last years of his life.

Do you have a work by Julio Galan that you wish to sell. Please fill out the form here