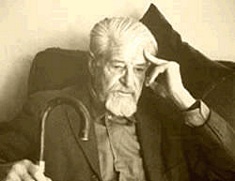 O'Gorman was born on July 6, 1905, in Coyoacán, a suburb of Mexico City, to Cecil Crawford O'Gorman, and Irish painter and a Mexican mother. In the 1920s he studied architecture at the famed Academia de San Carlos. He became a well known architect. and under the influence of Le Corbusier introduced modern functionalist architecture to Mexico City. As he matured, O'Gorman turned away from strict functionalism and worked to develop an organic architecture, combining the influence of Frank Lloyd Wright with traditional Mexican constructions. An important early commission was for a house and studio for painters Diego Rivera and Frida Kahlo, built in 1927. As he worked on the project, he developed his passion for drawing and painting, with the help and influence Rivera although he inherited his father's technique of tempera on wood. His paintings often treated Mexican history, landscape, and legends and were mostly commissioned by the lucky few who were in his circle. Soon he became a recognizable figure in the art world of Mexico City. He painted various murals like the ones in the Independence Room in Mexico City's Chapultepec Castle, and the Gertrudis Gonzalez Bocanegra Library in Patzcuaro. Perhaps his best known work is the Byzantine style colored-stone mosaic that decorates the Central Library of the Universidad Nacional Autonoma de Mexico which he finished in 1951.

Do you have a work by Juan O'Gorman that you wish to sell. Please fill out the form here