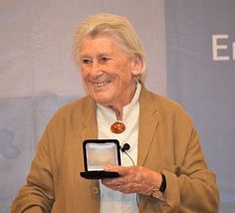 Helene Joy Laville was born in the Isle of Wight, England on September 8, 1923. She lived in Canada from 1947 and until 1955 when she moved to San Miguel de Allende, Mexico to study art at the Instituto Allende de Guanajuato. During her stay in Mexico she met Roger von Gunten who had emigrated from Switzerland and had fallen in love with the rich colors and traditions of San Miguel. His influence over her style would later become a staple in her unique vision of the world. She married Jorge Ibargüengoitia and they would remain together until his death in a plane crash in Spain.
Juan García Ponce wrote a book about Laville's art in 1977 where he hailed her simplicity and character. Her artwork was promoted by Ines Amor at the grand Galeria de Arte Mexicano, along with most of the Mexican Masters of the time. Her first exhibition here was in 1967 and she has had a very successful career since then with numerous solo and group shows around the country and abroad. She lived and worked in her studio in Cuernavaca, Mexico until her death on April 13th, 2018.

Do you have a work by Joy Laville that you wish to sell. Please fill out the form here