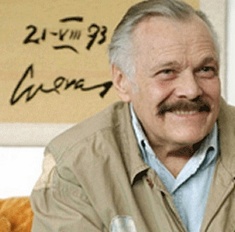 Cuevas had brief formal training as an artist when he attended the Esmeralda School of Arts in Mexico City, but this was no obstacle for the self taught painter who has become one of the most noted artists of our day. With his beautiful ink and pencil drawings and his impressive prints he has gained international fame. Some of his work has served as illustrations for books throughout the world. In 1992 the Museo Jose Luis Cuevas was inaugurated in Mexico City in his honor. In 2004, Marco, the Museo de Arte Contemporaneo de Monterrey, and one of the highest regarded art institutions in Mexico held an individual exhibit of works by Cuevas. In September of this same year he got a PhD Honoris Causa from the Universidad Veracruzana in Xalapa. Among the important attendees of this ceremony were the Governor of Veracruz, Miguel Aleman Velasco and the Dean of the University, Victor Arredondo. The proposal for this event was made by the Ramon Alva Gallery and was approved unanimously by the University Councel. "We wish to recognize his importance, trancendence and influence in contemporary mexican art, to which we can vouch for his charisma, commitment and imagination, not only as a creator but also as a promotor of mexican culture" said Arredondo of the artist.