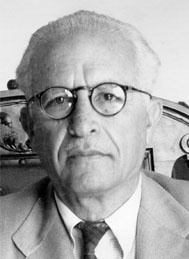 Jose Guadalupe Zuno Hernandez was born on April 18, 1891 in La Barca, Jalisco. A true renaissance man, Zuno was an accomplished lawyer, humanitarian, naturist, painter, cartoonist, teacher, writer and as a politician he became Mayor of Guadalajara in 1922 and Governor of the state of Jalisco from 1923 to 1926.
He was expelled from high school for having radical political ideas and had to move to Mexico City to continue his studies. Once there he met with artists and intellectuals. Jose Clemente Orozco became a close friend and mentor. His studies were centered in law and political science while he developed his artistic talents by drawing cartoons for several local publications. When the Mexican Revolution broke out, Zuno went back to Guadalajara where he was a founder of an art atelier called "Centro Bohemio". This shop for aspiring painters and draughtsman became one of the most famous cultural centers in the state of Jalisco.
He moved back to Mexico City just in time to witness Victoriano Huerta carry out his legendary coup d'etat. This time he spent his days with Roberto Montenegro, Dr. Alt and David Alfaro Siqueiros among other friends. Their influence made Zuno drop his activist work to become a full time artist. He held many exhibitions in several important galleries and produced two murals for the Museo del Estado and the Salon de Cabildos at the Palacio Municipal. In 1914, Zuno returned to Guadalajara where he went back into politics where he would in 1922 become Mayor of Guadalajara and then Governor of the state of Jalisco. He never stopped painting as it occupied most of his little free time.
During 1974, at age 83, Jose Guadalupe Zuno was the victim of a scandalous kidnapping orchestrated by various groups who fought against then president Luis Echeverria, who were also the perpetrators of the failed kidnapping attempt that took the life of Eugenio Garza Sada. Many marches and manifestations were held after this incident asking for his immediate release and the pressure became so great that he was let go a week and a half after his capture.
José Guadalupe Zuno died on March 16, 1980 in Guadalajara, where he is recognized as one of the state's most notable men.

Do you have a work by Jose Guadalupe Zuno that you wish to sell. Please fill out the form here