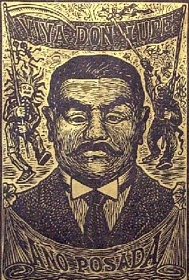 Considered to be one of the best engravers in Mexico´s history. Compared by some to Honoré Daumier for his merciless satire of bourgeois life, Aubrey Beardsley who illustrated Oscar Wilde's Salomé, and political cartoonists as Herbert Block (Herblock) who took on McCarthyism and Stalinism. Posada was born in Aguascalientes on February 2, 1852. His brother Cirilo, the town's schoolteacher taught him to read, write and draw. He started drawing and copying religious images at an early age and worked in a ceramic workshop before learning the art of engraving. In 1866 he started working as an apprentice at the Taller de Trinidad Pedroza where he learned lithography and engraving. This experience helped him make a few satirical illustrations for "El Jocote" magazine.
In 1872 his satires of Jesús Gómez Portugal (a regional boss or cacique) became the first to produce repercussions. Gómez forced Posada and Pedroza to move to Leon Guanajuato where they started to produce their own lithographs and prints in wood that would illustrate matchboxes, documents and books. After a flood destroyed most of León in 1887 he decided to move to Mexico City, where he went to work for Irineo Paz, grandfather of Nobel Prize winning author Octavio Paz. He opened two additional workshops and also drew political cartoons for many periodicals. His dedication to his work became legendary. A short time later, he became the head artist at the Taller Antonio Vanegas Arroyo, where he made thousands of illustrations for this press that produced inexpensive literature for the lower classes. They printed various newspapers as well as comedies, farces, thrillers, songbooks and histories of saints and historical figures. He also made illustrations and political caricature for other editorials like "Argos", "La Patria", "El Ahuizote" and "El Hijo del Ahuizote", where they would oppose the current government run by Porfirio Díaz. He is reported to have worked for over 50 different publications in all. Posada worked closely with Manuel Manilla and Constancio Suarez (poet) to produce rich editorials against the dictatorship. Along with Manilla, he became the greatest promoters of the tradition of the Day of the Dead, celebrated November 2 in Mexico. Posada´s most notable work is the "Catrina" where a skeleton is dressed up in the fanciest clothes of the time to represent the corrupt society under which he lived. It was this theme that got him national recognition and even landed him in jail a few times. From the outset of the Mexican Revolution of 1910 and up until his death on January 20, 1913, Posada produced countless prints for the workers press where he established his notoriety becoming an influence on other artists such as José Clemente Orozco, Leopoldo Mendez and the Taller de Grafica Popular. There are major collections of his works at the Bellas Artes National Institute, the Biblioteca de Mexico ("Library of Mexico"), the National Library of Anthropology and History and the Municipal Archive of the city of Leon, the art collection at the Basilica de Guadalupe in Mexico City, the Getty Research Institute, the Art Institute of Chicago, the University of Hawaii, the University of New Mexico and the Library of Congress.