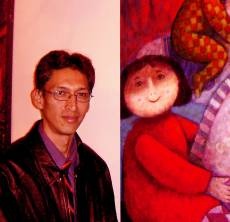 Born on November 24, 1965 in La Libertad, Trujillo, Peru. He began his formal training at the Escuela Superior de Bellas Artes Macedonio de la Torre in his hometown. During his starting career he has been awarded several recognitions since 1986. His work has been exhibited in Peru, Ecuador, Mexico and the United States.

Do you have a work by Jorge Jose Chavez Morales that you wish to sell. Please fill out the form here