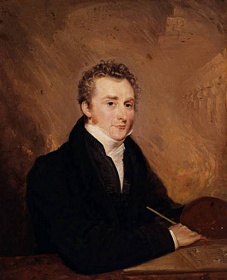 Born on July 19th at Haydon Bridge Northumberland. Martin moved to London in 1806 where he married at 19, gaving lessons in drawing and watercolor to earn a living. His first exhibition was in 1812 where his Turner inspired work became noticeable in itself. Other exhibitions quickly followed. He also enjoyed success as a mezzotint engraver after in 1823, he was commissioned to make several plates for American publisher, Samuel Prowett to illustrate a book by John Milton. John Martin died on February 17, 1854 in London.

Do you have a work by John Martin that you wish to sell. Please fill out the form here