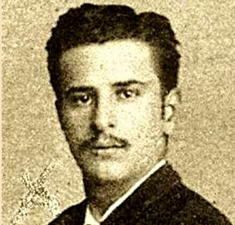 Born on June 16 1866 in Campeche Mexico to a Mexican mother by the name of Marcelina Franconis and a Spanish father, José Clausell making him Meztizo in caste. He moved to Mexico City when he turned 20 years old and received a Law degree. The great injustice that reigned throughout the country in those years drove him to publicly fight against the tyranny of politicians. In his quest he became an editor and contributor to various newspapers and periodicals. His activism landed him in jail several times and finally in 1892 he was exiled to France where he took residence in Paris for a year.
A young Joaquin became amazed by the romantic lifestyle of Montmartre where artists achieved worldwide recognition for their work. It is here where he learns about impressionism, a style that he was to perfect and make his own during his career in art which was also influenced by his friendship with Dr. Atl.
Clausell became the master of impressionist landscapes in Mexico at the turn of the century. He died tragically on November 28, 1935, when he fell from a rock wall in Lagunas de Zempoala in Morelos while he was making one of his frequent hikes out in the Mexican outdoors.

Do you have a work by Joaquin Clausell that you wish to sell. Please fill out the form here