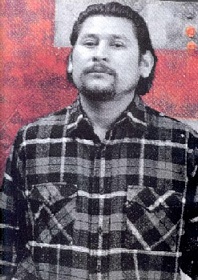 Born on March 27 in Juchitán Oaxaca (where Francisco Toledo was born 19 years earlier). He studied Civil Engineering and worked as a topographer for some time. Then, in 1980, he decided to plunge into a career in art and enrolled at the Taller de Gráfica de la Casa de Cultura del Istmo, in Juchitán where he studied until 1983. He immediately began studying at the Escuela de Artes Plásticas, Pintura y Grabado of the National Fine Arts Institute in Oaxaca. He also studied at the famed Escuela Nacional de Pintura, Escultura y Grabado La Esmeralda in Mexico City. He has been recognized with several prestigious awards. In 1989 he was awarded the Grand Acquisition Prize at the 9th Encuentro Nacional de Arte Joven in Aguascalientes. He was the first Mexican artist to receive the Gold Palette at the XXVI International Art Festival of the Grimaldi Museum in Cagnes-Sur Mer, France in 1994. During his life he was an iron-worker, poet, novelist, editor and singer. In 1989 he published many of his poems in a book titled "Siempre en Llamas" and in 1995 a short novel called "Zeferino y su hermana Mariana Pombo". He was also the founder of the Fundación Guiée Xhúuba to promote art and cultural activities in Oaxaca. Urbieta died on March 21 in Mexico City.