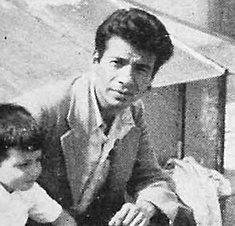 Born in the small town of Dos Estrellas Michoacan on June 3, he moved with his family to Mexico City and enrolled in the Santiago Rebull Popular painting Center directed by the painter Gabriel Fernández Ledesma and the engraver Everardo Ramírez. From 1935 to 1937 he was a member of the League of Revolutionary Writers and Artists where he created posters against facism. He also belonged to the Popular Graphics Workshop (TGP) as of July 1945. This same year he was awarded a residential scholarship by the Guggenheim Foundation and went to live in New York for two years where he cooperated in a mural project for a school in Lexington. His work shows a particular leaning toward the subject of large cities like Mexico City and New York and especially the alienation of the individual in the face of the industrial modernization. For this reason he was invited to take part in several exhibitions in the United States, for example in the Chicago Arts Institute. Although he appears to have left the TGP in about 1956, his work continued to be included in its publications until at least 1960.

Do you have a work by Jesus Escobedo that you wish to sell. Please fill out the form here