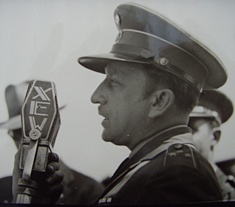 Beteta was born in Toluca, Mexico and his works are now part of the Museo de la Acuarela in one of the oldest buildings in Toluca known as El Gallito. At first he wanted to become an architect, but when the Mexican Revolution started, he enlisted in the military where he climbed to the rank of General. In one of his battles he got to meet David Alfaro Siqueiros. This meeting might as well have been prophetic for after the Revolution he started to express himseld through painting. He studied at the famed Academia San Carlos and met great Mexican Masters like Diego Rivera and Dr. Atl who became great influences in his work.

Do you have a work by Ignacio Beteta that you wish to sell. Please fill out the form here