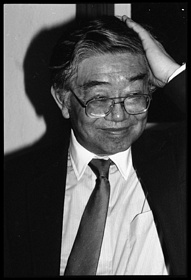 Born in Wuhu, Anhui Province, China, Hui-Ming, he left home when he was 16 years old and attended the University of Amoy in China.

By virtue of his English proficiency, he served as an interpreter with the U.S. Army Air Forces in the China-Burma-India Theater during World War II. He was an interpreter at the Infantry Training Center in Guilin and at the Command and General Staff School in Kunming. He won a Commendation of Merit from the U.S. Army Air Forces. In the course of his duties, he met Gen. and Madam Chiang Kai-shek and top U.S. commanders, including Gen. Joseph Stilwell and Gen. Henry "Hap" Arnold.

After teaching Chinese language and literature at Yale University from 1951-61, he followed his desire to be an artist and joined the art department at the Moses Brown School in Providence, R.I., eventually rising to be department head.

He moved to Amherst in 1964 to join the Art Department where he taught painting, drawing, calligraphy and basic design. He also served on the board of The Massachusetts Review. His retirement in 1988 allowed him to pursue his artistic endeavors full-time. His art evolved through many media, including watercolor, oil, woodcuts and calligraphy. His ability to blend Chinese and Western styles reflected his love of art and poetry. Numerous galleries and museums featured his work.

He created Epoh Studio Press, collaborating with printmaker Harold McGrath of The Gehenna Press. His limited-edition set of "Birds and Animals" prints published by The Gehenna Press is included in the Beinecke Rare Book and Manuscript Library collection at Yale University and the Library of Congress.

He published five other books, including "The Boat Untied," poems by Tang Dynasty poets, and "Land on the Tip of a Hair: Poems in Wood," illustrated by woodcuts for poems written by poets he knew personally: Robert Bly, David Ignatow, Linda Pastan, William Stafford, James Tate and others.

In "Ten Poems and Lyrics by Mao Tse-tung," Hui-Ming translated 10 poems by the Chinese leader which concern historical incidents in the Chinese Revolution, especially the Long March into Northwestern China during the 1930s. Wang’s woodcuts illustrate "Jumping Out of Bed," a book of poetry by Robert Bly, and "Robert Francis: Collected Poems 1936-1976," a book of poetry dedicated to him by his friend, Amherst poet Robert Francis.