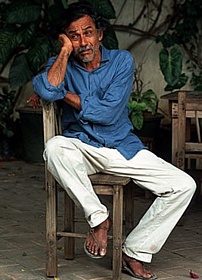 Born on July 17th, 1940 into a family of shoemakers and pig-butchers, Toledo spent only a short time in Juchitán on the Isthmus of Tehuantepec before moving with his family to the states of Veracruz and Chiapas. The young Toledo studied printmaking in Mexico City and had his first solo exhibition at the age of 19 in Fort Worth, Texas. After living for some years in Paris, he decided in 1965 to return to the Isthmus region of Oaxaca. Intent of recovering his native Zapotec ethnicity, Toledo has since devoted much of his energy to social projects. Thanks to him, cultural centers in Juchitán and Oaxaca City host exhibitions and house important collections of graphics, photographs and books. As a member of the pressure group Pro-Oax, Toledo has fought tirelessly to protect the architecture and ecology of his state. Predictably, Toledo's art is deeply rooted in the history and enduring presence of Mexico's native cultures. Often he takes as his subject the fauna of the Americas. But Toledo's work is always idiosyncratic and highly charged. In the words of Carlos Monsiváis, essayist and friend, Toledo is "animistic, rational, ferociously sexual, enamored of the abstractions of nature, capable of staggering brusqueness and timid tenderness..." Toledo's bestiaries and insectarios of grasshoppers, turtles, toads, rabbits and coyotes are frequently hybridized with human genitals. In one painting a woman is lost in a shoal of phallic fish; in several drawings the reclining body and elevated legs of the grasshopper resemble a mating couple. These visual comparisons, erotic and ironically playful, suggest the surrealist influence of Max Ernst; but they also reveal what Toledo has called "a taste for the paradoxical and fantastic that has existed in Mexico since pre-Hispanic times". Because his work deals with mythology and metamorphoses, Toledo has often been likened to a shaman. Fascinated by shamanistic practices and sympathetic magic, his imagery retains great ritual power and intensity. The artist employs a vast range of methods to construct his images. Toledo's love of texture has often led him to work with amate. Still used in the Puebla highlands for ceremonial purposes by the Otomi, amate paper is made from pounded tree-bark fibers. Other non-art materials favored by Toledo include pistachio shells and jacaranda seeds, wax and sand. The result is an artisan quality which undermines the boundaries between 'high' culture and indigenous 'craft'. Indeed the archaic surface of some sand-enriched paintings reminds the viewer of early cave paintings. Toledo presents himself to us in a rare and revealing interview filmed to coincide with the exhibition at the Whitechapel. In this video, Mexican film-maker Rafael Ortega and art-historian Cuauhtémoc Medina evoke Toledo's homeland and show him at work. Squatting on the ground, in his habitual white cotton clothing, he creates a stenciled image using a color wash. Toledo's work -- as Dawn Ades notes in the excellent exhibition catalogue -- reflects the tension between order and chaos, control and chance. It is this process that the Mexican poet Verónica Volkow describes so well: "At some point the process ends although it could continue. With Toledo, the act of painting turns into a ritual of unending creation and destruction: he paints and removes paint, draws and buries the drawing; he works on successive palimpsests; to erase is to reveal the color that has been devoured. Untiringly he pulls out his magic figures, as a magician pulls objects from a hat, a sleeve, a foot -- from anywhere. His work is the creation and reproduction of infinity."

Do you have a work by Francisco Toledo that you wish to sell. Please fill out the form here