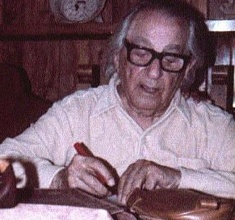 Born in Barcelona, Spain. He studied at L' Academia Lliure, and L' Escola de Bellas Arts in this city. He was a pupil of Isidre Nonell (1907-1908), and worked as a designer ceramist at the Cocurny Studios in Barcelona. In the 1920’s went to Madrid and Paris and became interested in impressionism, as well as in cubism. Cézanne influenced his work. Francisco painted oils on canvas with themes based on landscapes, still life, and people. He produced ceramics and collages in figurative post-impressionist styles as well as abstractionism.


In Spain the artist was a member of the art groups "Nou Ambient", "Els Evolucionistes", GAI Group (Group of Independent Artists). Camps went to France in 1937, and established his residence in Mexico in 1939, where he was a professor at the "Escuela Nacional de Artes Plasticas" (National School of Fine Arts), in Mexico City, which gave him the opportunity to help form several generations of Mexican artists. He wrote several works related to the Mexican art history, which was one of his passions.


Since his first exhibit at the Workers Athenaeum in 1915 in Barcelona, his work was included in hundreds of individual as well as collective exhibits, for example, "Nou Ambient", Dalmau Galleries, Layetanes Galleries, Sala Parés (Margall), El Camarin Galleries, Sala Nonell, in Barcelona, Spain; the Catalonian Center of New York, Muirhead Galleries, Costa Mesa, Heller Gallery, San Francisco, in the USA; the Spanish-Mexican Cultural Institute, Israeli Center, Fine Arts Palace, Museum of Modern Art, in Mexico City; Club de France, Paris, and the University of Toronto, Canada, just to mention some. Camp’s works are displayed in several public places including the Ciudadela Museum in Barcelona, Spain, and in the Museum of Modern Art in Mexico City.


In 1978 Camps-Ribera returned to Barcelona. On the occasion of his 90 the birthday he received several honors in Spain and in Mexico; his work was included in several exhibits, as well as in the gallery of the Caixa de Barcelona.

Do you have a work by Francisco Camps-Ribera that you wish to sell. Please fill out the form here