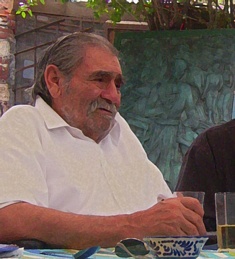 Federico Cantu Fabila was born in the US in 1929 to Federico Cantu Garza, considered one of the most important artists in Mexico for his emblematic works such as the image of the Mexican Seguro Social and the painter Luz Fabila, who at the time of his birth were in self imposed exile like several other followers of Jose Vasconcelos like Diego Rivera and Frida Kahlo. Young Federico began his career at an early age, learning from such masters as Roberto Montenegro and Jesus Guerrero Galvan and being helped by critics of the stature of Ines Amor and others who frequented the Cantu residence at the time. In 1965 he began producing iron sculptures which would become an important part of his body of work. He produced monumental sculptures like the one of Fray Servando Teresa de Mier unveiled in downtown Monterrey in 2009. Federico Cantu Fabila died on May 30, 2013 in Mexico City due to pulmonary emphysema.

Do you have a work by Federico Cantu Fabila that you wish to sell. Please fill out the form here