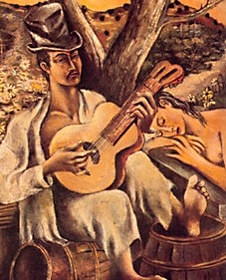 Federico Cantu was born on March 3, 1908 in Cadereyta, Nuevo León. From 1922 to 1923 he attended the Escuela de Pintura al Aire Libre in Coyoacan, directed by Alfredo Ramos Martinez. He traveled to France, Spain and the US between 1924 and 1931 where he held numerous exhibits. He lived in New York from 1938 to 1941 and in 1943 he became a teacher at the Esmeralda School and then at the University of California in 1949. In 1945 he started making prints under the tutor of Carlos Alvarado Lang. For the Purisima Church in Monterrey, Nuevo León, he made a series of prints that he finished in 1952. He was a talented artist with deep knowledge of painting, drawing, prints, bas-relief, sculpture and glass works. This experience was most evident when the Palacio de Bellas Artes held a retrospective exhibit in 1970 and then another one in 1986 called "Federico Cantu: Ciclos y Reencuentros". This master of surrealism died on January 29, 1989 in Mexico City and his ashes are placed at the foot of the mural he painted for the seminar of the Misiones Extranjeras. Other tributes for him were held in 1991 at the Museo Franz Mayer and the Museo Nacional de la Estampa.