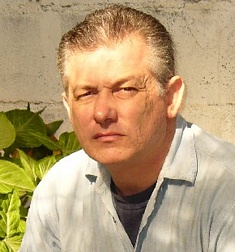 AKA EVALCON Born in Monterrey, Mexico in the year of 1964. Ernesto Valdés studied Communication Sciences from 1981 to 1985 at the Universidad Autonoma de Nuevo Leon (UANL). As a student he received various awards for his works in graphic design and photography working under the direction of noted art critic, Alfredo Gracia Vicente. He also studied art and photography at the Sociedad Mexicana de Fotografos Profesionales, Kodak Mexico and The Art Institute of Dallas. In 1985 he started working for the Galeria de Arte Alfonso Rubio in Monterrey. After two years he left the gallery to teach drawing, design and photography at Centro de Estudios Superiores de Diseño de Monterrey (CEDIM) and the UANL where he held the position for 10 years. During this time he also worked as a photographer and draughtsman for the Hospital Metropolitano Doctor Bernardo Sepúlveda and as reporter and graphic designer for the Instituto Mexicano del Seguro Social (IMSS) illustrating various publications for the institute. He also held a teaching position for the noted art school of Arte AC in Monterrey. He has exhibited his photographs and drawings several times during his career at several recognized art institutions such as the Escuela Normal Superior Miguel F. Martínez, the Centro de Educación Artística Alfonso Reyes, part of the Instituto Nacional de Bellas Artes (INBA) and the Biblioteca Central del Estado Fray Servando Teresa de Mier.