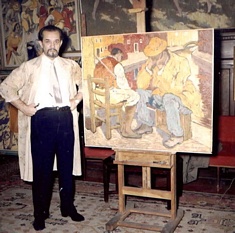 Born in Hodmezovasarhely, Hungary, in 1905. He began his art studies under the supervision of Janos Tornyai, a Hungarian master of the 20th century. At age 15, the town held an exhibition of his paintings in the movie-theater. At 21 he began his journey through the world with a trip to Italy where he made landscapes of his homeland to sell on the streets for money. He opened a studio in Milan with the help of a generous mentor, and worked there until 1942 when he was forced to emigrate because of WWII. In 1956 he moved to NYC where he exhibited with Frank Lloyd Wright.

Do you have a work by Emil Lindenfeld that you wish to sell. Please fill out the form here