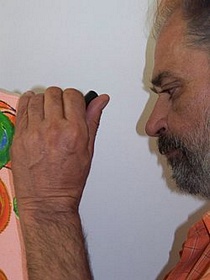 Born in Mexico City on July 25, 1955. Well known and regarded as a painter and performance artist of the new wave. Garza Aguilar has exhibited widely in Mexico. An exhibition of his work in Beijing, China in 2009 was met with huge success being this his first experiment in the international market. His painting style is greatly influenced by Edvard Munch and Francisco Toledo.

Do you have a work by Eliseo Garza Aguilar that you wish to sell. Please fill out the form here