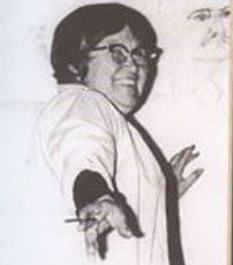 Elena Huerta Muzquiz was born in Saltillo, Coahuila, Mexico on July 15th, 1908. She studied at the Academia de Pintura de Saltillo with Ruben Herrera. Between 1929 and 1933 she went to Mexico City to study at the Academia de San Carlos with Carlos Merida. She was a founding member of the Liga de Escritores y Artistas Revolucionarios (LEAR) and was invited to work on a TGP project in 1939. From 1941 through 1946 she lived in the ex-USSR. She formerly joined the TGP in 1948. She was director of the Jose Guadalupe Posada and Jose Clemente Orozco (later renamed Jose Maria Velasco) galleries. Her first mural was completed in 1951 in her hometown of Saltillo. Her work was exhibited countless times in Mexico and abroad. Nena Huerta, as she was fondly called by her friends, died in Monterrey, Mexico in 1990. Her only surviving daughter, Sandra Arenal Huerta followed in her legacy of social struggle. In 1999 the Government of Coahuila published her memoirs titled "El círculo que se cierra".

Do you have a work by Elena Huerta that you wish to sell. Please fill out the form here