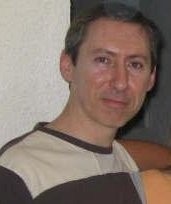 Born in Monterrey, NL on September 7th, 1966. Eduardo Orona studied art and graphic design since 1990 having the chance to learn from great masters like Jose Luis Cuevas. He has shown collectively since 2005 in important institutions such as the Museo Metropolitano de Monterrey and the Casa de la Cultura in Reynosa. His art has also been subject to solo shows since 2008. A talented illustrator, set designer and painter he currently lives and works from his workshop in Monterrey, Mexico.