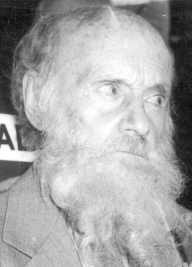 Gerardo Murillo Coronado, better known by his pseudonym Dr. Atl "is one of the most peculiar individuals born in the American Continent" as Diego Rivera once said. A painter, writer, hiker, philosopher, vulcanologist and politician was born in Guadalajara on October 3, 1875 and died in Mexico City in 1964. Atl is considered one of the greatest draughstmen and painters in Mexico, compared to the likes of Jose Maria Velasco and Joaquin Clausell. He also took advantage of his skills as an alchemist to develop a new kind of resin based pigment that he called Atlcolors. In 1958 he launched his manifesto: the Aerolandscape. He flew over the valleys and volcanoes near Mexico City and captured them in a way they had never been seen before. He wrote extensively, being his most important works about volcanoes, history and popular Mexican art. Dr. Atl received numerous awards for his literature and art, including the National Arts Award in 1958 and the Belisario Domínguez Medal of Honor. He died in Mexico City in 1964.

Do you have a work by Dr Atl that you wish to sell. Please fill out the form here