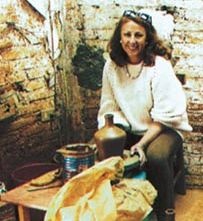 Born in Mexico City on December 5, 1943. From an early age, this native of San Angel showed a great interest for drawing and painting. In 1970 Cristina moved to Paris where she set up her studio. Her work has been exhibited numerous times in Europe, Asia, Latin America and the US and is part of important permanent collections in institutions such as the Paris Modern Art Museum, Tamayo Museum (Mexico City), MARCO (Monterrey Mexico), the Basilica de Guadalupe Art Collection (Mexico City) and Fundacion Ralli (Punta del Este). In 2005 she finished an important mural "Virgen de Guadalupe" at the Museo de la Basilica de Guadalupe to add to the series of public works she has made throughout Mexico City and Paris.