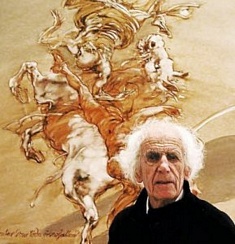 Born on February 8, 1927 in Thionville, France. He was a student at the Art School in Nancy and was later named professor of printing and engraving at the San-Etienne School of Art. His work was exhibited in group shows at first with participation in Jeune Jeune peinture, Biennale de Paris, Ecole de Paris, Salon d'Automne, Peintres Témoins de leur Temps and Peintres-graveurs francáis where he was named a member in 1968. His first solo-show came in 1957 and his works have traveled the globe with shows in Paris, London, Tokyo, Munich, Stockholm, Washington, Osaka, Nagoya, Jerusalem, Mexico City among others. Weisbuch, an exceptional artist swore never to rest until he had collected the movements and expressions of the best musical, literary and pictorical works in human history. His work was an homage to such greats as Jacques Clot, Rembrandt, Lautrec and Daumier, to name a few. His talent and sensibility made him known worldwide resulting in tributes to him during his career and up to this day. This great artist died on April 13, 2014 in Paris, France.