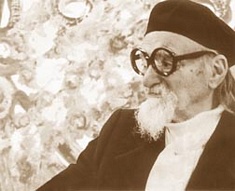 Born in October of 1882 to Buenaventura Reyes y Zavala, a collector and antiques dealer and doña Felipa Ferreira Flores in Guadalajara, Jalisco. He was said to be the Mexican Chagall by Marc Chagall himself and Picasso, upon seeing his work said: "How refreshing! He must be a very young artist.", as Chucho Reyes was about to turn 60. Coming from a wealthy family he found it possible to study art as a silversmith apprentice and later master of this craft. He also spent time learning woodworking techniques. His first serious job was as a window dresser in a department store. In 1927, after his parents death, he moved to Mexico City where he fit in perfectly among circles of artists. There was an interesting article in Time Magazine titled "Mexico's Chucho" on Oct 2 1944. His first solo exhibition was held in 1967 at the Palacio de Bellas Artes. He died in Mexico City in 1977.

Do you have a work by Chucho Reyes that you wish to sell. Please fill out the form here