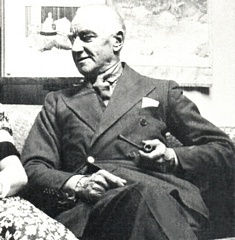 Born on December 18, 1875 in Brotton (now Redcar & Cleveland), England. His father, Samuel William Sykes was an amateur artist and influenced him to study art from an early age. Charles was a student at Rutherford Art College en Newcastle. In 1898 young Sykes was awarded a scholarship to attend the Royal College of Art of South Kensington in London. Early in the 20th century, when it was common to personalize each automobile with an original hood ornament, John Walter Edward, Lord of Montagu commissioned his friend Charles R. Sykes to create an emblem for his Silver Ghost that would represent the secret love affair between the Lord and his secretary, Eleanor Velasco Thornton, that they had to keep hidden because she was from a low social class and he was a member of a Royal family. Eleanor posed for "The Whisper", in which she appeared holding a finger to her lips as if asking for silence. A few years later, Claude Johnson, director of Rolls Royce asked Sykes to sculpt a mascot that embodied: "speed with silence, absence of vibration, the mysterious harnessing of great energy and a beautiful living organism of superb grace" to become the standard emblem of the brand since the board had noticed that some customers were using mascots that they deemed inappropriate. Sykes presented "The Spirit of Speed" a modified version of Eleanor with her arms stretched back. This image finally dubbed "The Spirit of Ecstasy" and known also as "The Flying Lady" or "The Silver Lady" became the official symbol of Rolls Royce automobiles on February 6, 1911.

Do you have a work by Charles Robinson Sykes that you wish to sell. Please fill out the form here