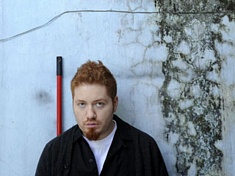 Born in Zacapu, Michoacan, Mexico. He studied in the Escuela de Artes Plasticas at the University of Guadalajara and in some workshops that taught him the techniques of printmaking, restoration, Western Art history and others. He considers himself a self taught artist. Larracilla has been awarded three honorable mentions at the State Young Artist Exhibit organized by the Government of Jalisco, First Place at the Jose Atanasio Monroy contest by the University of Guadalajara, and First Place at the Janssen Art Award in Mexico City. His work has been shown at the Teatro del IMSS in Guadalajara in 1996, Expresiones en el Foro de Arte y Cultura Gallery in 2000, the Casa Museo Lopez Portillo in 2001, the Carmen Ex-convent in 2001, the San Javier Club in 2002, the Casa Teran in Aguascalientes in 2002, Les fleurs du mort in 2003, Museo Michoacano in 2004, Leonardo Galerias in Puerto Vallarta, and Galerie Jadite in New York City in 2005. He also made illustrations for literature with Tierra Adentro Editors and at the Espacio del Arte with Televisa.

Do you have a work by Carlos Larracilla that you wish to sell. Please fill out the form here