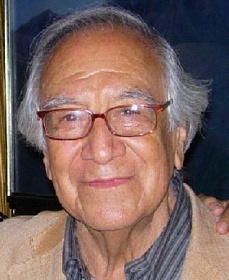 Born on August 8, 1926 in Mexico City. In 1941 he studied at the Academia de San Carlos and then at the Esmeralda with Agustin Lazo, Diego Rivera, Frida Kahlo and Feliciano Peña. At the same time he was attending night school at the UNAM to study architecture. He was a founding member of the Artistas Jovenes Revolucionarios and in 1945 he joined the TGP. He was recognized in the Concurso Niños Heroes for his printmaking in 1947, and another one in 1956 at the Festival of the Youth of Warsaw. He lived in Guatemala in 1953 and 54 and in 1959 he went to Cuba to document their political process. He painted a mural at the Museo de Antropologia in 1964 and in the Casa del Obrero Mundial in 1970. He is considered one of the four "Fridos" along with Arturo Estrada, Guillermo Monroy and Fanny Rabel, for their involvement with Frida Kahlo over a span of more than 10 years. They studied under her supervision and are fundamental scholars of her life and work as well as a legacy to the era of the Muralists.