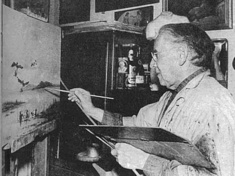 Born August 18th, 1883 in Oaxaca. He studied at the San Carlos Academy. His teachers were Antonio Fabres and German Gedovius. From his youth, he was highly regarded in the art community for his aesthetic intuition, his masterful drawing, colors and techniques. In 1911, he finished his studies and held his first exhibition in September. Above all, his landscapes caught the attention of the critics. Francisco Leon de la Barra, then president of Mexico, visited the exhibit and was so impressed that he decided to grant him a scholarship to study in Europe. Garcia Nuñez lived in Barcelona and Madrid, where he worked at the Prado Museum and made superb copies of some of the best works by some of the Old Masters to send them to the San Carlos Academy in Mexico. In 1912 he was asked to join the Exposicion Nacional at the Palacio del Buen Retiro in Madrid, where he proudly displayed 16 Mexican landscapes. He called himself an impressionist and old school painter who hated modernism. The magazine Artes de Mexico has dedicated a number entirely to this artist. His work is in the permanent collection at the Museo Nacional de Arte MUNAL. This icon of Mexican art died in Mexico City in 1965.

Do you have a work by Armando Garcia Nuñez that you wish to sell. Please fill out the form here